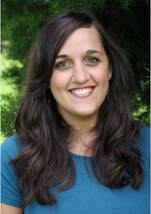 It is my very great pleasure to announce our winners, alternates, and honorable mentions from the 2019 Florida MTNA Competitions which was held October 26-27, 2019 at the University of South Florida in Tampa.  We had a total of 67 registrants and heard some fantastic playing this weekend.  Congratulations to all our participants on your hard work. See their photos and bios directly below the list of winners. 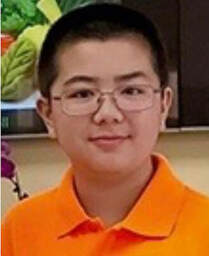 Timothy Yu is 14 years old, and he attends 8th grade at Don Estridge High Tech Middle School in Boca Raton. He has studied piano for five years, first with Barbara Salani, and since 2018 with Maria Gomez. Timothy has won several awards for his playing, including three first place awards in the Palm Beach County Music Teachers Association’s Scholarship Competitions, for the years 2017-2019. In 2018, Timothy was one of the winners in the Golden Key Music Festival Piano Competition, and performed at Carnegie Hall’s Weil Hall. Timothy also won the 2019 Pompano Beach Children in the Arts Piano Competition, Advanced I Level, and the 2019 MTNA Florida State Piano Competition, Junior Level.

Besides playing piano, Timothy excels at math and painting. 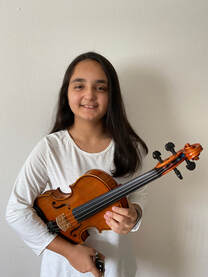 Sophie was born in Japan, in 2006. She began playing violin at the age of six, attending a music school in Yerevan, Armenia. In 2017 Sophie has been selected to be the concertmaster in PMP Super Strings Orchestra. In 2019 she was selected for the All-State Florida Middle School Orchestra.  She is the winner of FFMC “Violin concerto” and other numerous categories. She is also the winner of the FSMTA State Concerto Competition in 2019; winner of the “Florida Sacred Music” competition. 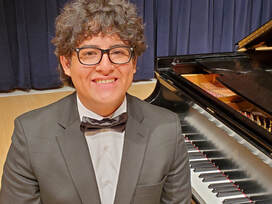 18-year-old Arturo Fernandez was born and raised in Trujillo, Peru.  He began his musical life at home at age 4 under the tutelage of his father and uncle. At age 6 he performed with the Trujillo Symphony Orchestra. He was a prize-winner in the “Music Patronage Competition” in Peru, and participated in several music festivals in his home country. In the spring of 2019, he was awarded with a full scholarship to Florida Gulf Coast University where he currently studies piano with Dr. Michael Baron. Since coming to the United States Arturo was the overall winner of the Jillian Prescott Young Artist Award for which he will play the Liszt Piano Concerto No. 1 next season with the Southwest Florida Symphony Orchestra. He is currently one of the six finalists in the Tampa Bay Symphony Orchestra Jack Heller Young Artist Competition.

​Daniel Park, 17, is very passionate about his study of the violin. He started to play violin at the age of four and currently studies with Lauren Murphy. He has attended the Curtis Summerfest Young Artist  Program and the Meadowmount School of Music.

Daniel has participated in the Florida Federation Music Clubs since 2011 and has won numerous awards. He was awarded first prize for the senior concerto competition in 2014 and first prize for the Advanced II solo competition in 2015, which are both the highest categories. He also was a featured soloist at the award ceremony of the Florida Federation Music Clubs Junior Convention in 2015. Daniel was the first place winner for Florida State Junior Stings at Music Teachers National Association in 2016-2017 and second place winner for Florida State Senior strings at Music Teachers National Association in 2017-2018.
​
He is a junior at Freedom High School in Tampa, and maintains excellent grades. When he is not playing violin, he loves playing piano and playing basketball. 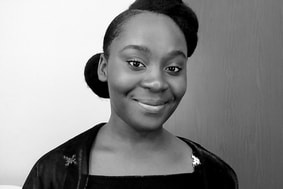 The summer of 2019, Present attended WNO’s Opera Institute  and ArtsBridge Summer ArtSong to develop classical vocal skills within the art song and operatic repertoire.
​
She has sung in masterclasses for Denyce Graves, Harolyn Blackwell, Julie Jordan and Nathan Gunn, Brian Zeger,  among others. Her most recent performance was in the NWSA Fall Voice Concert at First Miami Presbyterian Church.
Miss Present has won several Musical Theatre, Art Song, and Duet categories at the Florida Federation of Music Clubs during since 2017. She was awarded the “Most Outstanding Female Voice” award in the spring of 2019. She placed finalist and was awarded “Broadway Bound” at the Schmidt Vocal Competition in 2019 and was awarded “Encouragement Award” the previous year. Present is the 2019 High School Division winner of the Classical Singer Online Summer Competition.
She has received scholarships from Take Stock in Children Miami/Big Brother Big Sister Foundation, Schmidt Vocal Competition, Schmidt Vocal Institute, WNO’s Opera Institute, ArtsBridge Summer ArtSong,  and the New World School of the Arts.

Wooldjina is from and currently resides in Miami, Florida. 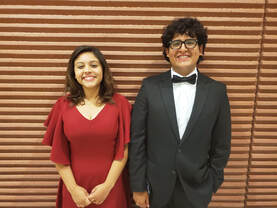 Victoria Paulino de Souza, 18, is from Belo Horizonte, Brazil. She is currently a freshman piano performance major studying with Dr. Michael Baron for which she receives a full scholarship. In 2009, she performed in the opening concert at the Legislative Assembly Theater of Minas Gerais and won the “Young Musician” BDMG Cultural Competition.  Victoria Paulino received an award in the IV National Young Highlight Competition. In 2012, she participated in the Lang Lang & Telefônica Competition, becoming the winner and the only Brazilian selected to play with this pianist at the O2 Arena, in Berlin, Germany. Since then Victoria participated in music festivals, taking classes with renowned teachers. In 2017, she was awarded first prize at the Yamaha National Piano Competition. In 2018 she attended the Oregon Piano music festival, completing two weeks of advanced piano studies.

Jair Zacarias, an 18-year-old pianist was born in Trujillo, Peru. He started playing the piano at the age of 6.  When he turned 13 he was accepted into the National Conservatory of Music in Lima, Peru.  There he studied with Professor Katia Palacios for five years and performed frequently in Peru. Jair performed in masterclasses for Dr. Michael Baron from the Bower School of Music at Florida Gulf Coast University. In the fall of 2019 he received a full scholarship to attend FGCU where he currently studies with Dr. Baron. 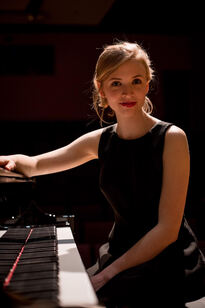 A native of Atlanta, GA, Caroline Owen was a semifinalist at the 2016 International Keyboard Odyssiad and a prizewinner in Georgia and South Carolina MTNA Young Artist competitions over the past three years. She was the 2018 winner of the Atlanta Mozart Society Competition and received a scholarship to study at the Mozarteum in Salzburg under Dominique Merlet and Christopher Hinterhuber. She will be returning to Salzburg in February 2020 to compete in the 14th International Mozart Competition. Owen performed Rachmaninov’s Piano Concerto No. 2 as a winner of the Furman University Symphony Orchestra concerto competition. She has given solo performances across the U.S. and in Italy and Austria, most notably at the Mozarteum Wiener Saal, and she was invited to perform at the 2018 American Liszt Society Conference. Owen has participated in Atlantic Music Festival’s Summer Piano Institute (2018), the PianoTexas Young Artists Program (2019), and the Prague Piano Festival (2019). Passionate about chamber music, she recently formed the Athena Trio alongside violist Claudia Malchow and clarinetist Kelly Riordan; the group has worked with Peter Frankl, soprano Sarah Shafer, and the Jupiter Quartet. With a background in dance, Owen has pursued interdisciplinary projects, most recently premiering a multimedia work for solo piano and dance entitled Life Suite (2019) by composer Badie Khaleghian. She is currently studying under Dr. David Kalhous at Florida State University. Previous teachers include Liza Stepanova, Derek Parsons, and Jody Smith Parrish. 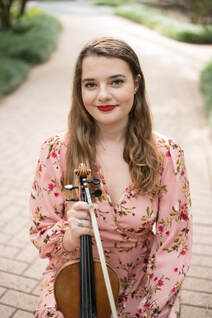 Young Artist String Winner: Margaret Ernst, student of Shannon Thomas
​
Maggie Ernst is a senior violin performance major at the Florida State University, studying in the studio of  Dr. Shannon Thomas. With a passion for ensemble playing, Maggie has been a member of several on campus orchestras, substituted in local and regional symphonies, and all varieties of chamber music.  She has attended several prestigious violin workshops, such as the Luby Violin Symposium in Chapel Hill, NC, Green Mountain Chamber Music Festival in Burlington, VT, the Kinhaven Young Artist’s Seminar in VT, and the Brancaleoni Music Festival in Italy.  Maggie is currently competing in her schools’ Young Artist concerto competition, and working towards her graduate studies. ​ 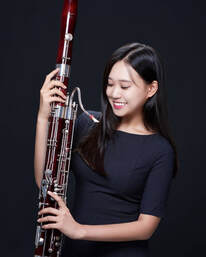 Heeseung Lee, a native of South Korea holds Bachelor of Music from the Ewha Womans University in Seoul, Korea and she received the Ewha Outstanding Performance Awards. She was a first-prize winner of the Mozart International Competition in 2013 and a winner of the Ewha Chamber Competitions in 2016 and 2017. Recently, Heeseung won the 2019 UCF Concerto Competition and Florida MTNA Young Artist Wind Competition. As a soloist, she has performed concerto by Mozart with the Romanian Orchestra in 2013. Currently, Heeseung is pursuing her Bachelor of Arts in Music at the University of Central Florida under Dr. Yoon Joo Hwang.

The competitions were held on Saturday, May 18 at Hillsborough Community College, Ybor City Campus. Congratulations to all of this year’s competitors and their teachers and families! Countless hours of work, guidance, and support went into the many fine performances at our competitive events.