These are interactive PDF files which are opened with Adobe Acrobat Reader. Click on the "Get Adobe Reader" icon to download this free program​. To fill out the interactive PDF files, first download and save the file to your computer. Fill in the application and then resave to your computer. Print the completed application or send as an email attachment.
​​
​
​Award Applications            *  Letter of Nomination from Local or District Executive Board
*  Letter of Recommendation for FSMTA Professional Colleagues
*  Letter of Recommendation from Students, Parents, and/or Friends
​
​Contact Ricardo Pozenatto, FLteacherawards@gmail.com, for more information or help with these forms. 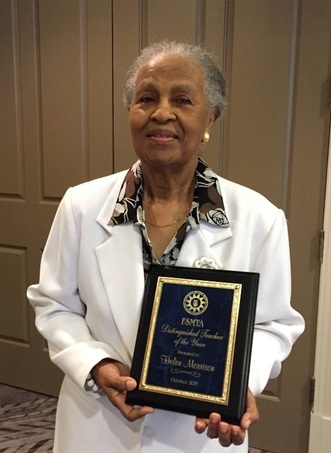 Helen Morrison FSMTA Distinguished Teacher of the Year Recipient for 2015
​
​Helen Morrison received her Bachelor of Science in Music Education from Xavier University in Louisiana in 1951. She spent the next 39 years working as a music educator in the public schools where she held the positions of Choral Director, Band and Orchestra Director, General Music Instructor, Music Specialist and General Classroom Teacher while working with students from kindergarten through college. From 1957-1992 she also served as the organist and choir director at St. Peter Claver Catholic Church. She has sung with the “Spiritual Renaissance Singers” and the USF Community Chorus. She has been a member of MENC, the National Guild of Piano Teachers, the Friday Morning Musicale, the Florida Music Educators Association, the Hillsborough Co. Teachers Association, the Hillsborough Co. Secondary Music Council and Alpha Kappa Alpha Sorority.

Helen is currently director and teacher for Morrison Piano Studio, a thriving piano studio that she established in her home in 1976 where she teaches both private lessons and group instruction. She returned to school when her children were older, and in 1980 she graduated with her Masters of Music in Piano Pedagogy and Performance from the University of South Florida where she served as a graduate assistant in class piano and music theory. Helen has also taught and led group piano classes at Patel Conservatory and at Piano Distributors. Helen was always ready to attend a workshop or seminar to learn something new, and she was one of the first teachers in the area to embrace the use of technology in music education. She broadened her student’s musical horizons by expanding her studio to include multiple keyboards for group teaching, playing with background accompaniments, recording, and performing orchestrated ensemble music. Her students also had the advantage of learning musical concepts and theory with computer-based games and activities. At an age when many teachers would have been thinking about retiring, Helen was attending technology workshops to learn as much as she could about how to effectively use these new tools.

Helen was a charter member of Mid-State Music Teachers Association when it was founded in 1974, and she was honored at their 40th anniversary banquet in 2014 for her long years of service to Mid-State. She has held every local office including president, chaired many committees and entered students in Student Days, recitals and competitions. She was Mid-State’s Student Day chair for several years, and she also has been active as an adjudicator for FSMTA Student Activities. She has conducted many workshops through the years on such varied topics as gospel music, jazz, studio management and Student Day preparation. In 1980 she served as co-chair of the FSMTA state conference in Tampa. In 1984 Helen received both her state certification from FSMTA and her national certification from MTNA, and she served FSMTA as district certification chair for several years. Helen also served FSMTA as editor of the newsletter. In 1999 two of her students won the FSMTA Pre-College Byrd Piano Ensemble Competition. Because of her many years of extraordinary service to Mid-State, she became Mid-State’s first and, and so far only, honorary member.

Helen has selflessly spent countless hours in the community volunteering her time to teach music to many students who did not otherwise have the finances or the opportunity, giving the gift of music to many low income and disadvantaged youths. She was Mid-State’s first teacher who was involved in the MusicLink scholarship program, and she encouraged others in the association to become involved in this endeavor. One year Helen created a program at a local library to teach beginning piano classes to underprivileged children who lived at a nearby housing project. She involved the family by insisting that a parent attend with the child. Helen arranged to have keyboards donated, and a local music store shared the cost of the music with her, so children without access to a piano at home were able to explore music making on the piano without incurring any cost. Another time Helen volunteered to teach several of a family’s 12 foster children, most of whom had special needs, at no charge, and she even drove over 50 miles each week to continue teaching them after they moved to another town. Since Helen goes about her service in a quiet and humble way, these are likely just a few examples of the many ways that Helen has been a light in her community and has spread her love of music to generations of students.

Here are some comments that Mid-State teachers put in their letters of recommendation for Helen, “Helen represents the epitome of what a great music teacher should be….Helen has always taught with the highest standards and ideals. Not only are her piano students well-prepared, but they are well-mannered and well-dressed. I have greatly admired her as a mentor and colleague…She is always there to share ideas, encourage and offer advice, put things in perspective, or just listen and commiserate… Helen Morrison is a giving, caring teacher and a very special lady.” Helen has been an inspiration to all of those in Mid-State, and she is most deserving of this year’s FSMTA Distinguished Teacher award.