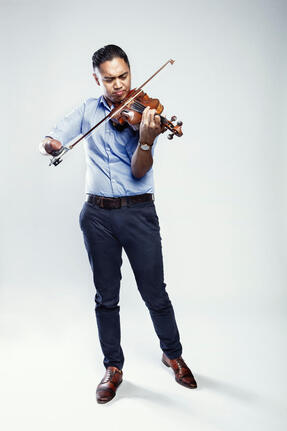 Music Inclusion for All: Evolution and Adaptation (Saturday 10:25 am)

Oftentimes, people with disabilities find the greatest challenge they face are the preconceived attitudes and biases of those around them. In an educative setting, this can lead to passive forms of discrimination such as exclusionary practices, lowered expectations and even unwanted sympathy. Not only do these practices limit the ceiling of development for the individual of a disability, they also limit an individual’s contributions to society. Attitudes of inclusion can also be challenged within a classroom setting--critics propose that students with disabilities are not adequately served unless they are separated from the classroom, working with specialists who are able to attend to their specific needs.

Adrian Anantawan, who was born missing his right hand, faced many of these exclusionary practices growing up, not only in the music classroom but in society at large. However, through the support of unique individuals across multiple disciplines, he was able to play the violin, beginning a journey that would lead him to perform at the White House, for the Dalai Lama and at the Olympics. Adrian will share the lessons he learned along the way of how to create inclusive practices at the intersections of music, education and disability, with the goal of lifting the ceiling of human potential for all.
Adrian Anantawan​ holds degrees from the Curtis Institute of Music, Yale University and Harvard Graduate School of Education. As a violinist, he has studied with Itzhak Perlman and Pinchas Zukerman, and Anne-Sophie Mutter; his academic work in education was supervised by Howard Gardner.

Memorable moments include performances at the White House, the Opening Ceremonies of the Athens and Vancouver Olympic Games and the United Nations. He has played for the late Christopher Reeve, Pope John Paul II, and His Holiness the Dalai Lama. Adrian has performed extensively in Canada as a soloist with the Orchestras of Toronto, Nova Scotia, Winnipeg, Saskatoon, Montreal, Edmonton and Vancouver. He has also presented feature recitals at the Aspen Music Festival and Weill Recital Hall at Carnegie Hall. He has also represented Canada as a cultural ambassador in the 2006 Athens Olympics, and was a featured performer at the Vancouver 2010 Winter Olympics Opening Ceremonies.

Adrian helped to create the Virtual Chamber Music Initiative at the Holland Bloorview Kids Rehab Centre. The cross-collaborative project brings researchers, musicians, doctors and educators together to develop adaptive musical instruments capable of being played by a young person with disabilities within a chamber music setting. He is also the founder of the Music Inclusion Program, aimed at having children with disabilities learn instrumental music with their typical peers. From 2012-2016, he was the Co-Director of Music at the Conservatory Lab Charter School, serving students from the Boston area, kindergarten through grade eight—his work was recognized by Mayor Marty Walsh as a ONEin3 Impact Award in 2015.

​Adrian is also a Juno Award nominee, a member of the Terry Fox Hall of Fame, and was awarded a Diamond Jubilee Medal from Her Majesty Queen Elizabeth II for his contributions to the Commonwealth. He is the current Chair of Music at Milton Academy and on faculty at Boston University Tanglewood Institute during the summer. Throughout the year, Adrian continues to perform, speak, and teach around the world as an advocate for disability and the arts.

​Click here for The Story Behind the Notes, a video highlighting Adrian’s inspiring story.

Gail Berenson, piano
Gail Berenson, Ohio University Professor Emerita of Piano, is a dedicated teacher, performer, author, noted expert on musician wellness issues, and the recipient of the 2002 Ohio University School of Music’s Distinguished Teaching Award. A Past President of Music Teachers National Association, she is a 2007 Foundation Fellow and was the recipient of its 2015 MTNA Distinguished Service Award.  She also received the Frances Clark Center’s for Keyboard Pedagogy 2019 Outstanding Service Recognition Award and its 2021 Lifetime Achievement Award.

Ms. Berenson developed a passion for collaborative performance when at age eleven she began accompanying the forty-member male chorus conducted by her piano teacher, appearing in concert throughout Wisconsin and Illinois. A native of Kenosha, Wisconsin, she continued her education at Northwestern University, completing degrees in piano performance and has performed in master classes with world-renowned accompanist Gerald Moore, baritone Pierre Bernac, duo-pianists Vronsky and Babin and, at the Lucerne (Switzerland) International Music Festival, with pianist and accomplished chamber musician, Mieczyslaw Horszowski. While at Ohio University she frequently collaborated with her colleagues both on and off campus and served as a member of the Lyric Duo with her flute colleague, Alison Sincoff.